Skip to content
“He is too perfect.”
– Lyndon B. Johnson 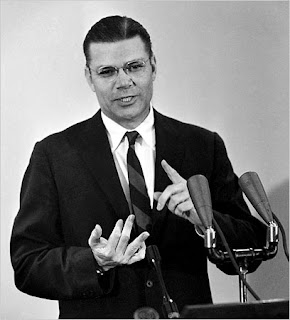 Admittedly I am no LBJ fan, but truth can often come from surprising sources. As my friend recently said, “If the Lord used an ass to speak words of truth, then who am I to judge?” (see Numbers 22). Contrary to popular opinion, Robert McNamara was, in fact, Perfect. Let me count the ways.

A true non-partisan, civil servant.
He left Ford, where he had been named president only 10 weeks before (and which he’d only joined to pay his wife’s medical bills after leaving academia), to be Defense Secretary at the ripe age of 44. Taking the $25K-a-year job cost McNamara $3 million in Ford stocks and options. He also happened to be a registered Republican. He later turned down LBJ’s offer to run for Vice President.

Data-driven and objective in a political environment.

Saved the world.
Despite his own attestations to the contrary, it was his idea that resolved one of the closest nuclear showdowns in history, the Cuban Missile Crisis. Specifically, it was McNamara’s idea to do a secret deal whereby President Kennedy offered to withdraw U.S. missiles in Turkey if Russian Premier Nikita Khrushchev removed his warheads from Cuba — a deal which resolved the crisis.

It is inane to apply the openness and transparency of our post-Cold War, post-“nuclear era” to the 1960s, when diplomats faced unprecedented complexity and fear thanks to the introduction of nuclear weapons and the bipolar, militaristic world order. McNamara navigated his own doubts adeptly – preserving national security while at the same time, seeking the best policy to the point of being willing to alter his own point of view and go against that of the Chief Executive’s… ultimately leading to his own termination.

Human despite his brilliance.
He lived his entire life honoring the Examined Life by wrestling with the ultimate questions, such as “What makes it immoral if you lose and not immoral if you win?”

But when it was appropriate for him to be transparent about these questions so critical to a free, functional, democratic society- via his memoirs, the Fog of War documentary, the visit to North Korea in the ’90s, and frank admissions (e.g. “War is so complex it’s beyond the ability of the human mind to comprehend. Our judgment, our understanding, are not adequate.”) – he was vilified rather than vindicated….proving that when it comes to popular opinion, it doesn’t pay to be thoughtful or self-correcting.

And alas: a stud.

Ah Robert: was it only 53 yrs that separated us?