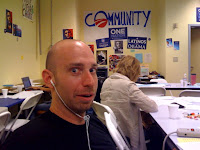 The ultimate Saul of Tarsus moment*: confessing to a room full of Obama supporters that you once supported John McCain. A sheep among wolves? Au contraire: these are progressives. Therefore, the response is rather this: a feigned intellectual curiosity seeking to cover up utter shock, disbelief and audacity.

My co-campaigner Chris managed to emote this quite well: note the seemingly focused, attentive gaze which all but masks the glimmer of terror further into the eyes.

*And when Saul was come to Jerusalem, he assayed to join himself to the disciples: but they were all afraid of him, and believed not that he was a disciple.