2015 marked my 4th year not-in-a-row at South by Southwest. My observations from last year still largely hold true, though this year some of the crowds seem to have staved off (Mykel, my Austinite buddy, speculated that some of this may be from key sponsorship changes this year – from Chevrolet to Mazda and from Frito-Lay to…McDonalds…) and I’m not going to disagree: I sure didn’t head over to the Golden Arches area. That said, there is such a plethora of rich, meaningful content and amazing people all in one spot, it still deserves a go.

First up was my panel, “Demystifying the Startup Accelerator Journey.” It was moderated by Luke Deering who recently coauthored “Accelerate” which featured the entrepreneurs’ perspective on evaluating accelerator programs (I’m also quoted in it but it’s still a super useful book). Joining us were Patrick Riley, Executive Director of the Global Accelerator Network and Ev Kontsevoy, founder of Y Combinator company Mailgun (acquired by Rackspace). 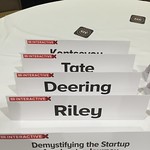 Some of our key discussion points:

Special thanks also to Matt Cartagena, Luke’s co-author, for the panelist wrangling.

Go Card! When we were done, I had the enormous pleasure of reconnecting with my Stanford classmate Chris and his awesome wife Suzanne. It’s been nearly two decades since I saw Chris when I did some work for him while he was at Trilogy (the memories of which seem to have stuck with me more than him ;). In addition to talking about college and Austin, we talked shop: Chris and our other classmate Steve head up a “venture studio” in Austin that helps lots of start-ups get going, and Suzanne has led various innovation efforts in her health care career. So continuing the accelerator talk made lots of sense. And the lamb shank at laV was pretty tasty. 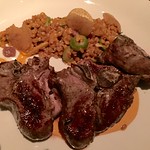 Always Be Pitching. The next day it was back to the Hilton to check out Brian Zisk‘s Elevator Pitch session. Given the pitchers were talking apps and startups, it was a pleasant surprise when Brian – a long-time Mozilla and open source supporter (check out Xiph) – called me up to share about the pilot program I’m currently working on, the MDN Fellowship. That was fun.

My honey does it again. For the third year in a row, the hubs organized the wildly-popular “The Seven Hottest Topics in Music Tech” panel. The room was packed and they had to turn peeps away. While the panelists tried to start with a conversational tack it became clear quickly that the audience wanted to cut right to the chase; they quickly course-corrected got to the 7 topics.

Gimme food, gimme love. While SxSW is amazing, for me the crux of Austin is two-fold: the food and the people. Luckily I had ample opportunity to enjoy high quality in both these areas. Certainly with the Porches (see above), and also with Alice and our two Bay Area-turned-Austinite friends, Dana & Luke, who invited us to brunch at Jack Allen’s Kitchen which lived up to its Texas heritage with a buffet line rivalling those at the DMV. I captured Luke’s plate for posterity: 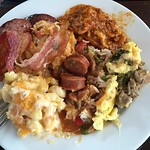 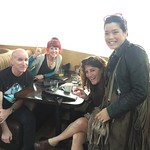 Moar BBQ was to be had with my coworker Janet and her fantastic partner Jason, who escorted us far away from the SxSW crowds to get the real deal at County Line. The bread alone was Texas-sized.

Finally but hardly least significant was my time spent with the Mitchell Fam. I’ve already mentioned Mykel, who married my college bud Sheeri and they’ve since produced four children (known as the Muppets) and have hosted me numerous times over the years, whether in SoCal or Austin, where they’ve now resided for nearly 8 years. When I go to Austin, getting on a SxSW panel is the icing; the Mitchells are the cake.  Thank you, family!