While Berlin and Germany have long been on my travel bucket list (a layover in Frankfurt doesn’t count), when the real opportunity to visit emerged through my work, I couldn’t believe it: could we really do this now? For reasons I couldn’t fully articulate, Berlin has long held a captivating if ephemeral appeal to me. So much history, so much culture and so much transformation in so little time. But these were all abstract concepts to me before last month.

So now my time to see for myself what this all meant arrived! Given that most of my current knowledge of the town related to an apparently lively music scene there, it was also a foregone conclusion that Todd had to join me.

The first 3 days of work were intense and extremely productive. As always it was fun to see yet another Mozilla space; I view these as instantiations of our Mission in a given cultural context. 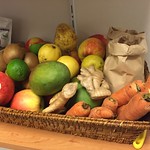 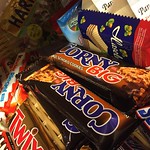 Except for their Corny bars, of course.

Fortunately, Mozillians know how to soften the blows of jet lag and international travel so we started slowly and appropriately. 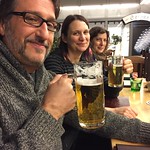 And even though our days were quite full of collaboration and deliverables, we were still able to venture out at night to see some pretty amazing stuff.

This list of ‘amazing stuff’ absolutely includes the great tip from my coworker Janet to check out Monsterkabinett and (perhaps more amazing) the stunning section of street art on Rosenthaler Strasse that you walk along leading up to it. 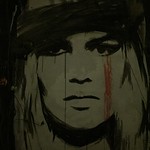 And close to our hotel was not only CheckPoint Charlie (we opted for the walkby-only vs going into the museum – this seemed sufficient), but also this building we couldn’t identify (anyone know?): 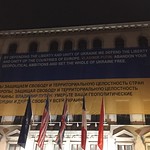 Of course being in the same room as my teammates is always enormously gratifying and relationship-building. And the added bonus was having our colleagues from the Foundation on hand to work through some new territory for us. It was a fruitful time! 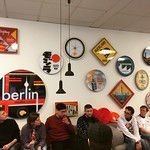 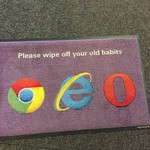 Once our 3 days of work were up, I could join the hubs in romping around Berlin – cold as it was.

Did I mention Todd likes beer? 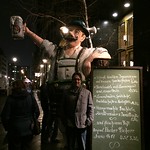 Going to Germany is sort of a beverage Aliyah for Todd

We couldn’t get enough of the street art – whether near Rosenthaler, the East Side Gallery or…pretty much anywhere. 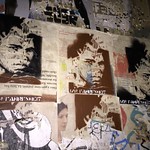 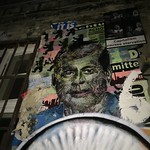 In honor of this post’s title

If there is one thing that I took away from Berlin, it’s the ubiquitous references to history – reaching back from the Roman Empire and laying out the dramatic eras of World War II and the Cold War, it’s all here to see. 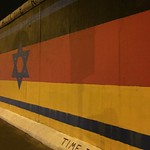 One of my favorite parts of East Side Gallery. 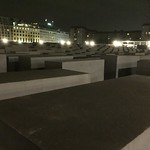 Poignant Jewish WWII memorial in the center of town

Before we left I read up a bit on some of the post-WWII programs. “Denazification” intrigued me a LOT. I need to read at least one full book on it.

And then there’s the food. THE FOOD. Where to start? Of course, there’s the supernatural sausages: 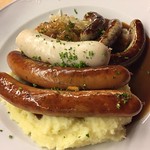 And the fact that pretty much all forms of meat enter a totally different league: 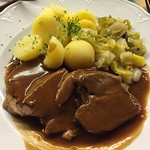 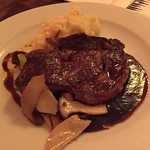 And yet, as amazing as all the meat (and beer, per the hubs) is, it’s really hard to come up with something better than the schwartzebrot. 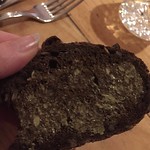 This homebaked slice was accompanied by pumpkin seed spread (also from the house).

What truly made Berlin awesome – apart from strolling around Mitte, the Brandenburg Gate and such – was hanging out with “the locals.” We had a great tapas dinner with Matt and Sara: 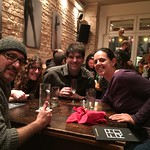 …and a *blast* hanging out with “Dr. Willy” a good friend’s relative. Willy came to Berlin before The Wall went down and stayed, studying and practicing medicine and now serving as a blue chip Berlin escort. 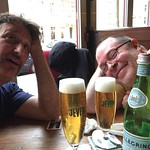