Some excellent Q&A in the NYT on the latest epic morphing of Wall Street elucidates the ongoing relevance of timeless questions such as “the individual vs. society”…”is inaction better than negative action”….etc. Excerpts below, with certain emphases added, and one more pitch to go to http://www.yourmorals.org – go there.

However, in lieu of solving such intractable problems, I’m focusing my small brain on tackling things like: given the fact that everyone will now be working for a bank*, will we all now be VPs and work “bankers’ hours”? Take me now…..

Q. So is it fair to say that Americans who are neither rich nor reckless are being asked to rescue people who are? …

A. Yes, you could argue that people who cannot tell soybean futures from puts, calls and options are being asked to clean up the costly mess left by Wall Street. To make the bailout palatable to the public, it is being described as far better than inaction, which administration officials and members of Congress say could imperil the retirement savings and other investments of Americans who are anything but rich.

But it is a good bet that the negotiations between the administration and Capitol Hill will include ideas about ways to help middle-class homeowners avoid foreclosure and perhaps some limits on pay for executives….

Q. How is it that the administration and Congress…can now be ready to come up with $700 billion to rescue the financial system? And is it realistic to think that the parties can reach agreement and get legislation passed in a hurry?

A. …As for rescuing the financial system, elected officials in both parties became convinced that, while a couple of venerable investment banks could fade into oblivion or be absorbed by mergers, the entire financial system could not be allowed to collapse. 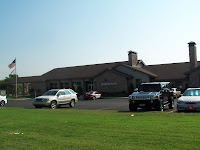 *What will these new banks be called? My mind gravitates to Steve Martin’s “Fred’s Bank” embedded in one of his best works