One movie, one webcast and one cocktail party later, I feel compelled to refine my previous allegations. Specifically, I’d chided our former Fed Reserve Chairman for using 40 years’ prior experience as an excuse for his scandalous neglect of the U.S. economic system. But, you say, 40 years’ experience sounds like a compelling reason to stay on the same trajectory? To that, I offer up three clarifications: 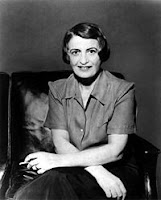 Yes, we have her to thank, too. “Objectivism” is an attractive philosophy not because it is true, but because it plays to our sense of pride. Why else would people eat up McCainistic lauds of “the American people” as being so virtuous when it was these people – not just corporate execs – who contributed to our current economic mess in living beyond their means (one example: embracing “Pick-A-Pay” negative amortization schemes…I mean, “negative amortization”??).

How much more roadkill do we need to accept that, when left to our own devices, we do NOT do the right thing?

******
Update on 12/11/08: my friend Jim just sent me an article which leads me to believe that Cardinal Ratzinger (aka The Pope) and I are somewhat aligned…

…and while I am not in 100% agreement with the entire article, I did find its assertion that “the market mechanism has a negative but not a positive function. The market cannot decide what innovations or practices are beneficial to society. It can only punish incompetence and inefficiency” to be incredibly thought provoking….I’ll be gnawing on that one for a while….