Let’s face it: we are bombarded with spin at work, on the freeway, on the airwaves, on the web….so tonight, it was with profound….refreshment….that I was introduced to PureSmoker.com.

This unabashedly frank site essentially allows “users” (in the truest sense of the word) to freebase out those pesky cigarette impurities (=tobacco) so people can just cut to the chase to access the source of their addictions more directly.

Straight from the straight-shootin’ site:

2. What is in the cartridge and this Vapor you inhale?
Three main ingredients make up this liquid (what some like to call ELiquid). They consist of:
Water: Cant survive without it. Its that substance you see covering 70+ percent of the earth
PG (Propylene Glycol): Considered generally food safe by the FDA (Food and Drug Administration) Its mainly used in flavoring extracts but can also be found in medicines, cosmetics, hand soap, etc…
Some Include Nicotine: Need I say more? I could go on for hours. The fact remains, NICOTINE IS ADDICTIVE.

You can’t say you weren’t warned! 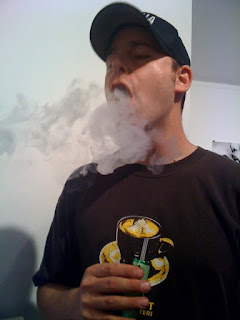