My friend Tony clued me into an interesting phenomenon: “Improv Everywhere” – whose tagline is, “we cause scenes.” Full deets at the site but for here, it’s enough to know that the experience involved:
1) downloading an Mp3 but NOT listening in advance
2) procuring a balloon, an umbrella & wearing a green, yellow, red or blue t-shirt
3) syncing your watch/clock/timekeeping device of choice PRECISELY to their website
4) arriving at Dolores Park, SF locked & loaded at 2pm PST

A tapestry of Monty Python-esque hilarity that tapped into the creative, free-spirited playful inner-child….undeniably the best way to spend a sunny fall day in the park 1/2 block from my front door.

Alas, the issue with respect to #3 did, however, lead to a slightly out-of-sync experience which itself was fairly revealing. It made me realize that some people actually live this way 24X7. Just a little bit off the mainstream clock. Which leads to all kinds of interesting behaviors and perceptions. Very enlightening. I’m not naming names. 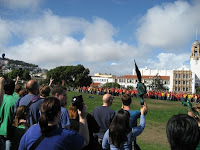 Participants ready themselves to enter into the climactic, Monty Python-esque “EPIC BATTLE” as promised by the omnipresent “Steve.”

BREAKING NEWS 10/20/08: the video has been posted and includes some of the music that really contributed to the hilarity of this experience. And, incredibly, apart from my 4 friends I attended with I also happened to “run in” to my co-worker Cory there – check him out at 1:48!: